ECONOMY AND POLITICS - Mind the Politics: The Adriatic Coastline: an unexpected opportunity of the Chinese initiative!

The Balkan region has a very complex history, as it has been a region where two Empires have crossed their swords and faith, - the Austrian and the Ottoman, dividing Slavic tribes into three different religions – Catholicism, Orthodox Christianity and Islam. At the beginning of 20th century, the Yugoslavia has emerged. It has had a turbulent history, and most of the nation-states have received independence after 1991. However, this period has turned into a bloody conflict between former Yugoslavians, shaping a region political picture. Most of the fighting’s has happened in Croatia and Bosnia between 1991 to 1995.

One of the most complex situations, politically, emerged in Bosnia and Herzegovina (informally known as Bosnia), which is home to three ethnic groups – Bosniaks (50%+), Serbs (30%+) and Croats (15%+). In fact, the country consists of three largely autonomous regions – the Federation of Bosnia and Herzegovina, the Republika Srpska and the Brcko district. Moreover, the country officially has 3 presidents – Bosniak, Serb and Croat. Similarly, each group has a one third representation in the two houses of the Parliament Assembly. Moreover, the Federation and the Republica also have their own local presidents and their own local parliaments, while the Brcko District has its own local government too.

Croatia and Bosnia are territorial neighbors, which has unsurprisingly shaped their relationships. During the Yugoslavian wars, the countries and their ethnic groups had fraught relationships, but they finally reached the Dayton peace agreement in 1995 (along with Serbia), ending the Bosnian War. Since then the countries have shared mutual peace and close links, as there is a big Croat population living in Bosnia, and many Bosnians study in Croatia.

One of the big topics lately is the building of the Peljesac bridge. As Bosnia controls the small part of the land on the Adriatic coast - effectively dividing Croatia into two parts, - it has been an irritating problem for many locals and tourists, heading to the UNESCO heritage city of Dubrovnik. During the Yugoslavian times such a division was not a problem, but since Croatia joined the EU in 2013, travelers and business face the border checkpoints. On Image 1 you can see where the Peljesac bridge would be built. 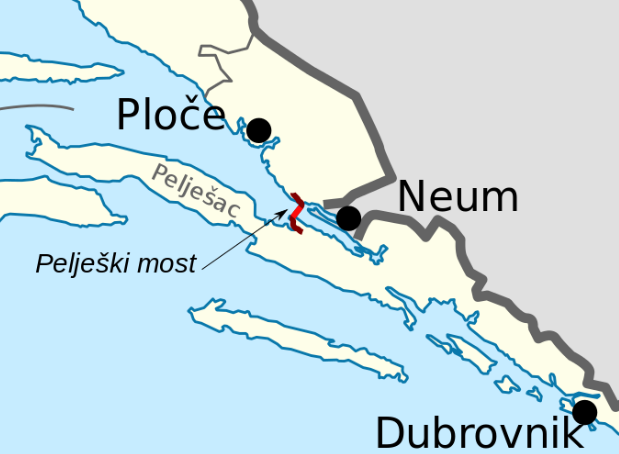 Croatians aims to build a bridge, connecting its territories, and to effectively by-pass Bosnia. However, Bosnia opposes the construction as they are afraid that it will block the country’s access to open sea, putting the end to the prospective sea-port in Bosnia. Not surprisingly, while a Boasnian member of the Presidency issues concerns about the bridge, Croatian and Serbian members approve the Croatian plan. As we see, the issue further divides the country – a situation, when of the three members of the Presidency one is preparing to launch a lawsuit against Croatia, opposed by other two members of the Presidency.

Croats argue that the bridge would be 55 meters high, allowing ships to enter the Bosnia territory, but many would not believe that the reality would be the same as the paper plans. If Croatia is right, tensions may calm down. However,  given the region’s history, if the port is blocked, it could cause both external and internal problems in Bosnia, as one ethnic group may see another as being on the same side as Croatia, and has the potential to incite inter-ethnic tensions that have long been an issue in the region.

One Belt, One Road and the Balkans:

Nevertheless, on Monday, 30th of July, 2018, the China Road and Bridge Corporation, has started a project to build a bridge, aiming to finish within 36 months. The EU covers 85% (approximately 357M euro) of the costs. If successful, the bridge is expected to boost the economic activities in Croatian part of the region, allowing more tourists to visit Dubrovnik. China will benefit too.

It is not going to be the only Chinese project in the region, with both Bosnia and Croatia welcoming Chinese foreign direct investments (FDIs) over the last few years. In Bosnia, the most notable investments have been in the power sector, with expectations of around 1 billion euros being invested in the coal mines. In Croatia, there has been talks about the China Railway Group Limited interest in investing into various infrastructure projects such as a project to modernize Rijeka-Zagreb-Budapest railway line and more investments in the hospitality sector.

The Chinese policy on Balkans must be seen in terms of the One Belt, One Road initiative – as China sees the region as one of the gateways to the European Union, investing heavily not only in Bosnia and Croatia, but also into other south Slavic nations. Chinese activities in the region and the EU participation in a bridge project shows that Brussels is ready to work with Chinese investments overall.

In conclusion, the Balkan region has seen some troubles through its history, but now it is a more or less stable region. Bosnia has a very complex political structure, with several governments and presidents working at the same time, but they have been able to keep the country running for more than twenty years now.

The region itself is welcoming Chinese FDIs - and is an important destination for the expanding One Belt, One Road initiative, - so even more Chinese-led projects are expected in the future. Yet, it can bring more stability and prosperity to the once divided neighbors.