ECONOMY AND POLITICS - Mind the Politics: Brexit, an on-going journey

The process of the UK leaving the European Union (Brexit) is probably the most important political, economic and cultural issue for both domestic population and investors willing to invest in the UK. Recently, there have been a lot of development regarding the leaving options, but it has costed a lot for the British Prime Minister, Theresa May, to make this progress – while the question arises – was it worthy the try?

The Chequers Plan, agreed by the cabinet in early July, is the latest up-to-date document regarding the future of Britain outside the EU, covering the most important parts of trade and business activities. On Image 1 you can see the main parts of the Chequers Plan. 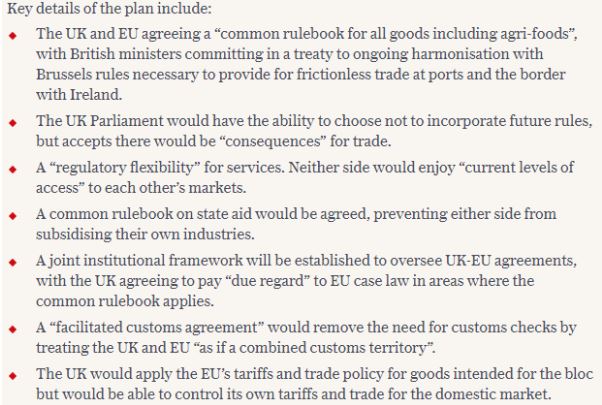 Mrs. May has experienced a backlash from her own party in July over the plan, as a Foreign Secretary, Boris Johnson, and a Brexit Secretary, David Davis, have resigned, stating that this plan would not represent the interests of the UK.

Moreover, the EU’s chief Brexit negotiator – Michel Barnier, has said that he strongly opposes parts of the Chequers plan. He insists that if Britain wants a single market, it would have to choose a Norway type of deal, - including some payments to the EU and a compliance with the Court of Justice of the European Free Trade Association States (EFTA court) – which is unacceptable to Ms. May (and her political future). For him, it is important to state that after Brexit the UK will become just a third-party country – not different from the other world, and thus make an example for other European countries, thinking about leaving the EU.

While Mrs. May still defends her plan, other options are starting to pop up, while serving different political goals.

Discussing possible options, it is useful to look at some of already working international agreements between the EU and the rest of the world.

A Norway type of deal would make the UK a member of the European Economic Area (EEA), meaning full access to the single market, but would not be required to join Common Fisheries Policy or Common Agricultural Policy. However, the jurisdiction of EFTA court would still apply, as well as some of the EU regulations – but, this time, the UK having no say in it. In addition, four freedoms of the EU would remain too, and, as a Norway PM asked – “why would you want our EU deal”?

The four freedoms of the EU cover the free movement of goods, capital, services and labour. It applies to all the EU member states and, with some exemptions, also to Iceland, Liechtenstein and Norway via the EEA， and to Switzerland through bilateral treaties.

Then there is a Canada style deal. It removes 99% of custom duties on exports, while remaining exemptions on some products and not providing Canadian firms an EU financial services “passport”. On a bright side, Canada does not need to sign to the EU four freedoms or ECJ rulings. It would limit the UK companies, comparing to what is allowed now, but it is still a solution.

A Ukraine type of deal is also possible. It includes a free trade agreement (yet with some restrictions) – but not a single market or custom union membership, as well as not participating at the four freedoms of the EU. The downside would be a need to implement some kind of a “hard” border, which will be the problem because of Ireland, but it would be possible to amend the deal afterwards.

Therefore, it is too early to conclude what needs to be done by now to allow a smooth transition from the EU – which is a frustrating reality – we know what should be done, which topics should be discussed – but we don’t know will they be discussed or no. There are plenty of options available, but it is going to take a lot of political capital to push for them.

The Chequers plan - good or bad, is probably already dead, which means the government will have to produce a new one, or to accept a no deal Brexit – which we will discuss in our next part.