Brexit continued to be the dominating factor for markets in what was a rather quiet week from a macroeconomic perspective. The situation in Downing Street still remains up in the air as Prime Minister Boris Johnson struggles to progress. With parliament having agreed his deal in principle, under the condition that there is time to scrutinize it with a view to amending it, the PM now favour’s a General Election, believing current Conservative populism, or perhaps more accurately dwindling Labour support could lead to him gaining the majority he needs in Parliament to pass votes.

Whilst Labour leader Jeremy Corbyn has previously pushed for a General election during the Brexit saga, he’s now in a position where he is the one blocking it. Boris Johnson is expected to table a vote for an election through the house today, but it was reported over the weekend that such is the knowing that Corbyn and colleagues would vote it down meaning that it did not have enough votes to carry, that we may say that vote pulled. Labour seems to want to know the duration of the Brexit extension, and whilst late last week we saw an agreement for an extension in principle from the EU, there was no exact time given. The French President Macron seems to hold the hardest line as he proposed a shorter extension to the end of November, however, consensus must be found through all EU member state countries. 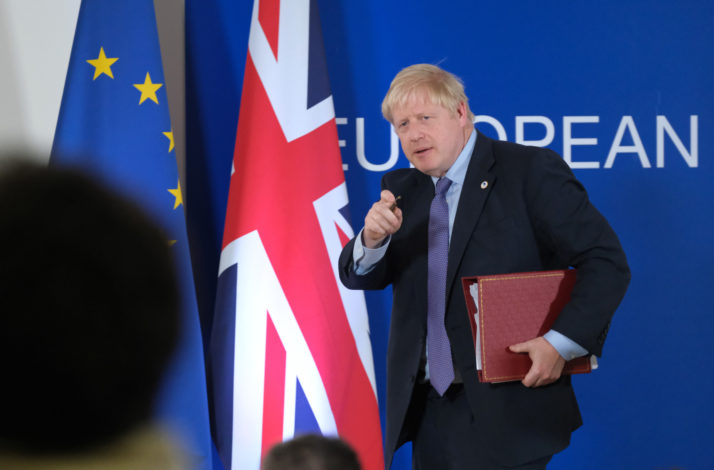 The roadblock in the negotiations has hit the market with the UK Pound suffering and retreating from the 1.3000 highs against the US Dollar to 1.2800. The Euro also suffered a similar fate against a resurgent US Dollar.  As stated with very little macro data, the markets looked to earnings season for some direction where there was generally good news, what was interesting was the price action in the stock markets where we naturally saw appreciation upon good news, but even the ‘misses’ from Caterpillar, Texas Instruments and the Struggling Boeing didn’t really make a dent in the wider indices and the S&P 500 and Dow Jones powered up to make new highs.

There was progress in the US/Sino trade negotiations as it was reported that they were nearing completion on “Phase 1” of the negotiations, in typical Trump fashion he championed the progress made on Friday as he seemed to jump in to stabilise the situation following some antagonistic comments towards China from Vice President Pence on Thursday.  Whilst the markets take some comfort from progression in these negotiations their, of remains trepidation over the progression of negotiations when we get to the more contentious issues.

This week is heavy on data, with Canada, Japan and the US all delivering interest rate decisions and naturally, the US will take centre stage with Jerome Powell under heavy pressure from Trump to cut rates. Indeed the expectation is for a further mid-cycle adjustment taking rates to 1.75% from 2% with deviation from this forecast probably causing the biggest movement.  Earnings season also continues this week with some of the world’s biggest names reporting BAT, AT&T, HSBC and Alphabet to name a few. Whilst the ceasefire in Syria/Turkey is in place, for now, developments there must also be watched. But, as always Brexit will be centre stage this week with Thursday’s deadline looming we would expect developments early this week.