After a December that in some cases has provided double digit negative returns, January has found us with equities moving up fuelled by the positive developments surrounding the US-China trade negotiations, Dovish Federal reserve and Chinese Government actions to assist in the stimulation of growth. December’s downturn contributed to the 2018 capitalisation loss of $ 13 trillion. To put this in the perspective, the total amount of the fall is equal to the value of all companies listed in China, India and Japan.

The continuation the positive momentum exhibited at the end of 2018 has remained in place in January.  But please do not assume that it was a straight-line move. The start of the new year was marked by another negative sales guidance from Apple (AAPL), thus triggering a flash crash on the foreign exchange market causing a ripple effect into other asset classes.

As can be observed in the table above, the US indices have in favour, with technology (Nasdaq Composite) and smaller capitalisation stocks (Russell 2000) outperforming the other indices peers.

The appetite for risk in the US can be observed by the return numbers. As we are moving down on the capitalisation towards smaller companies (Russell 2000) we can observe increased returns. This reflects a more positive view on the US economy. This has been influenced by positive developments in the China-US negotiation front.  To some extent, the markets are discounting the fact that we are currently in the longest partial Government shutdown in the history, caused again by the US Presidents battle to fund “The Wall” guarding the border with Mexico. The social impact of this shutdown is great, as many Americans will not been paid for the first month of this year. The economic impact is still to be fully evaluated, with analysts estimating an 0.5% negative impact in the first quarters GDP which could act to further reduce what is traditionally a slower quarter.

The appetite for risk has also been recognised in the evolution of economic sector stock indices relative to S&P 500. Refer to below chart: 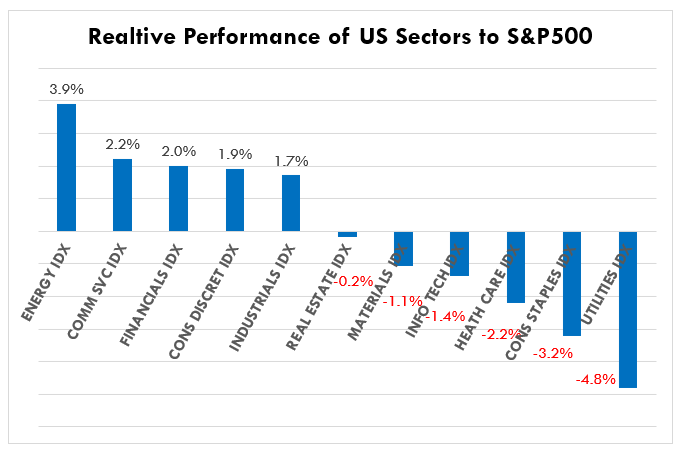 Economic sensitive and cyclical sectors (on the right side of the chart) have outperformed the defensive sectors like utilities and healthcare on the right, the sectors that were the top performers at the end of the last year.

As mentioned before, Apple surprised the markets by cutting the revenue guidance for the first quarter of 2019, quoting weaker than expected sales. Days after the announcement fresh news emerged reporting a second cut of production on mobile devices for the company. This was the second production reduction announcement in less than 2 months and will take the all-in cuts to a 20% reduction relative to the first quarter of 2018. The market naturally reacted negatively to this announcement, with Apple stock continuing to lose value making it the only FAANG stock that has returned to negative.

A new merger on the biotechnology sector was announced at the beginning of the year, Bristol-Myers Squibb has announced the acquisition of Celgene in a $74 billion stock and cash deal. Based on the closing price on January 3rd a 54% premium will be paid for Celgene. The combined company will have a $1 billion revenue spread across 9 products.

With the earnings season commencing we have seen for the first time in history the six biggest U.S banks reporting aggregated annual profits above $100 billion, also offering positive guidance on revenue and profitability over the next year. Bank of America shares have also been gained well following better than expected earnings and revenue forecasts. The consumer banking business grew by 52% on a year over year basis.

The “risk on” mode has been recognised in Europe, where the periphery (Italy and Spain) has outperformed the core (Germany and France). Investors have been cautious about Germany, the EU industrial powerhouse which has been affected by expectations of slower global growth.

The French Index has been affected by the prolonged social unrest caused by the Macron government policies. Corporate France has started to count the loses caused by the situation. Air France – KLM has announced a EUR 15 million reduction in sales attributed to the situation. Retailers like Carfour, Casino and hotel operators such as Accor have had their businesses impacted detrimentally by the current situation.

In the UK the, the Brexit deal has been rejected by the Parliament, with a vote of confidence in the Government being triggered by the Labour party in the aftermath. However, Theresa May’s Government remains in power for now.

In this volatile environment, the UK stocks have still managed to remain positive but with lower appreciation than the US and EU counterparts. By going down on capitalisation we are removing the impact of the  currency on the returns and we observe that FTSE 250 (midcap) had a greater return than FTSE 100.

The major retailers have reported the Christmas period sales. M&S and Debenhams reports have shown sales fall relative to previous year. John Lewis Partnership has reported a rise in sales but confirmed the previous guidance for a reduction in profits for the whole year. Tesco was different from the norm, reporting an increase of 2.2% in sales over the period and reiterated the profit target for the year. Decembers UK Retail Sales was released this week with the numbers falling considerably.  But consideration must be given to the fact that Christmas spending patterns are shifting with the emergence of Black Friday Sales shifting typical spending patterns one month ahead.

Over the next couple of weeks, we will see further company’s quarterly reports with the market paying attention to the future guidance on revenue and earnings growth ion respect of Trade War and Brexit

We wish you a great week ahead!