The first “real” trading day of 2019 on Wednesday 2nd January saw significant volatility in the FX markets, as investors aggressively repositioned into the popular safe havens of Japanese Yen, Swiss Franc and Gold through the European and US sessions (as global stocks endured another heavy day) with steady selling in all Yen and CHF crosses.  However, it was in the Sydney to Asia market crossover that the biggest moves came.

As always, we now try to dissect the move for driving forces and it appears there were several contributing factors, but the primary driver must be attributed to Apple slashing guidance for revenue for the first time in 2 years. This was attributed to a large drop off in product sales in China towards the end of 2018, bringing the share price down 8%. This naturally brought shockwaves to global stock markets and intensified the flight to safety bias, with the Yen proving to be the asset of choice as USD/JPY plunged 4% below 104.90. This price action saw the low seen in March 2018 matched and brings the market back towards the area of Yen strength, which has historically worried the Bank of Japan. 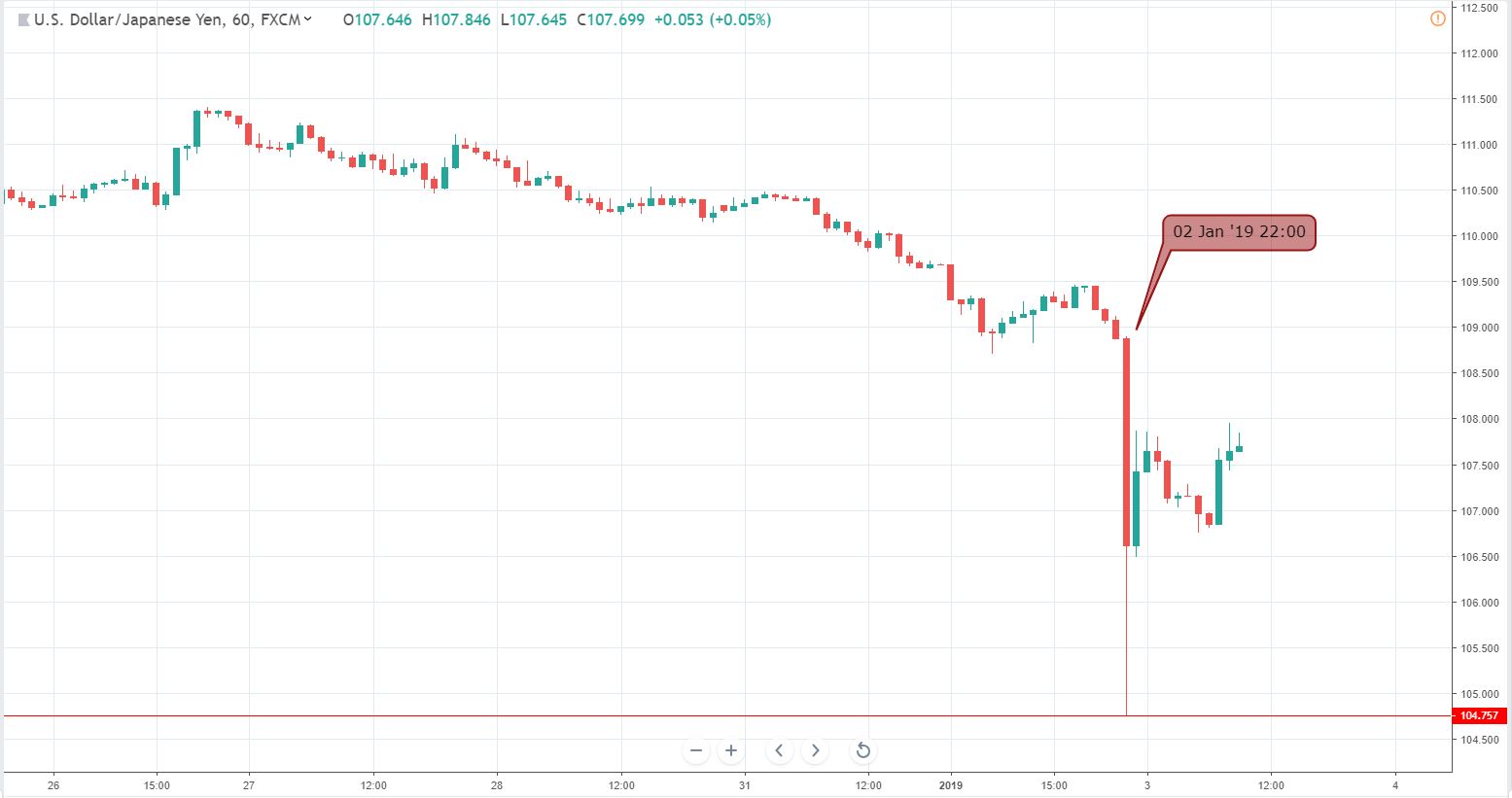 But was the Apple news alone big enough to cause a move of this magnitude? The guidance warning was most certainly unwelcome news to already vulnerable markets, with the partial US Government shutdown and no cohesion or confidence in the UK’s Brexit deal. But the move certainly seems to have been exaggerated by the illiquid time zone that is fell into, during the crossover from Sydney into Asia, particularly in view of the Japanese holidays this week.   But again, it looks like the algorithmic development in trading could have proven the cause of the more aggressive moves in currency markets.

A growing number of these situations seem to be arising, whereby when we see sudden and sharp price action due to a specific news event, the automated “Algo” systems can start a cycle of trading that cascades into “flash crashes”. This again seems to have been the case on Wednesday evening. Typically, these “flash crashes”are often highlighted by the fact that the extreme move is followed by a “reality check”, as the markets immediately correct a large percentage of the initial move, as markets normalise, perhaps under human intervention.

So whilst we can say the moves seen from 2nd January were exaggerated, the direction, tone and sentiment of global markets seem quite clearly towards a “risk-off” scenario.  With economic growth in the Eurozone, China and even in the US now looking worrisome, we are certainly looking at a year of opportunity in the markets, especially if you have the ability to trade from the short side, as well as the long.